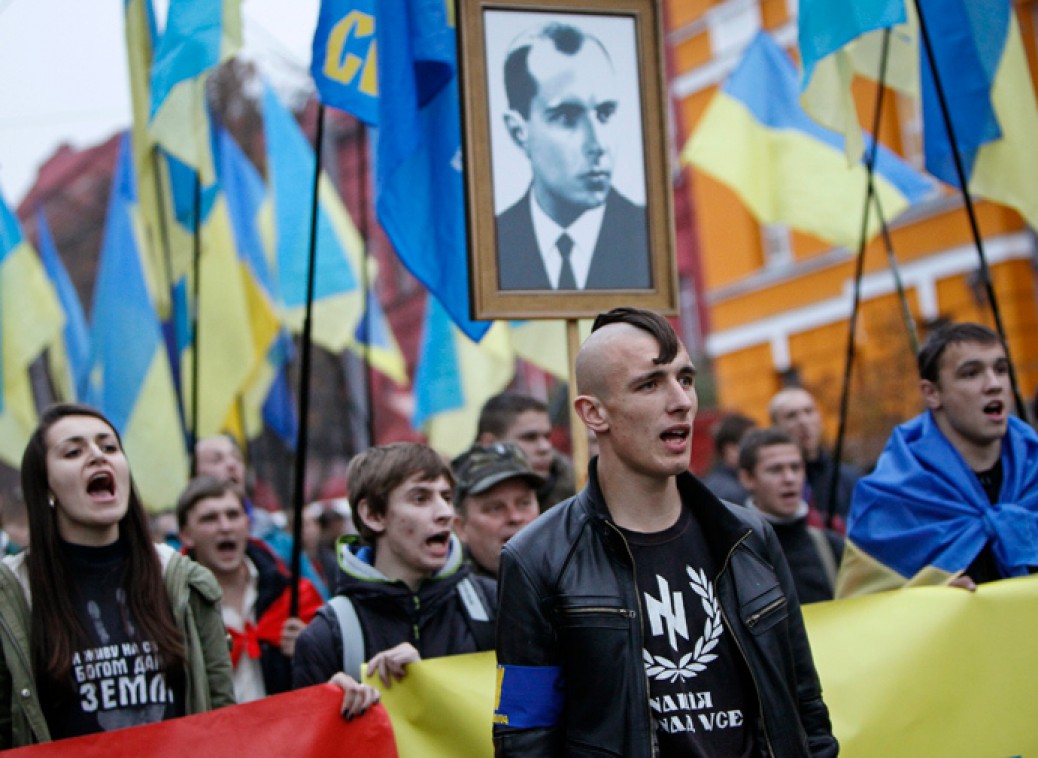 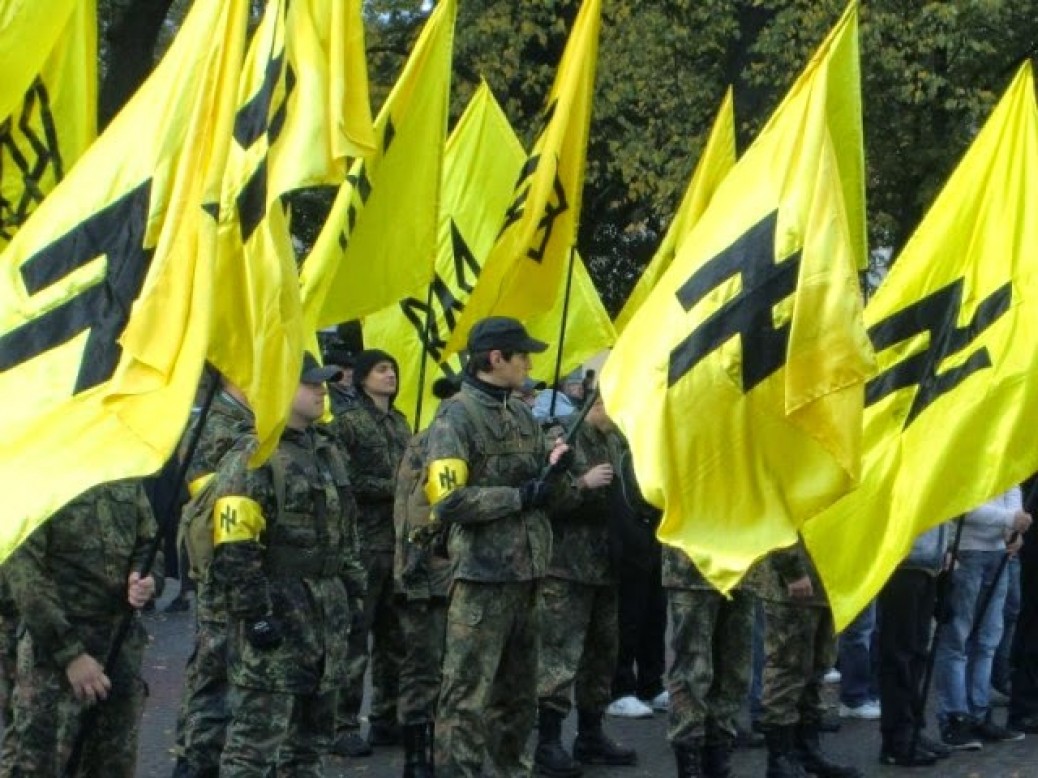 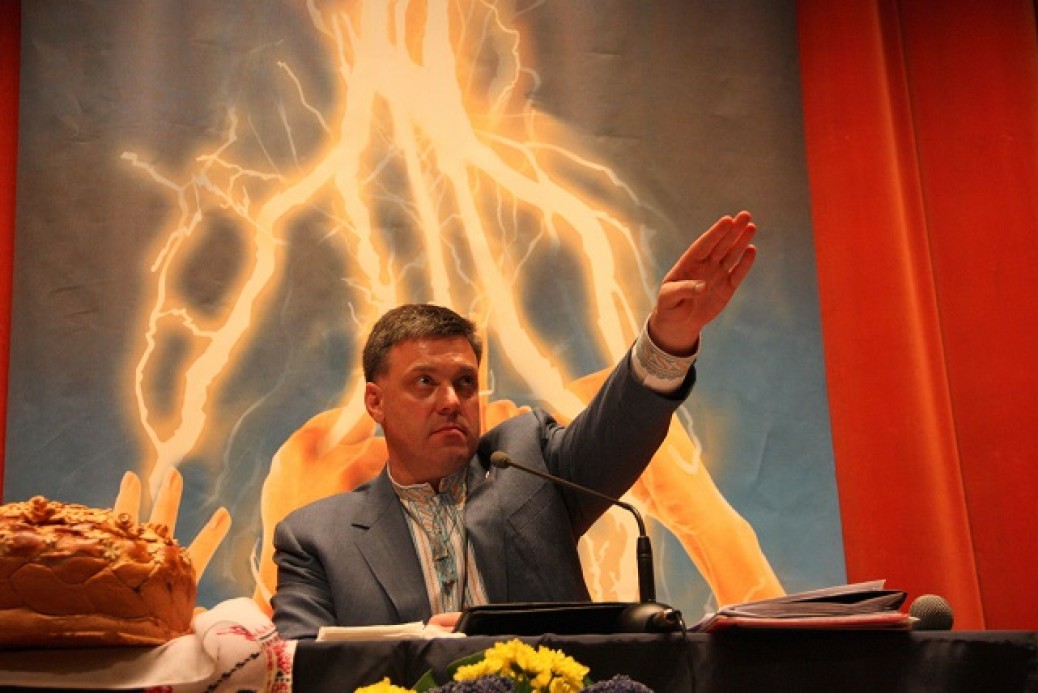 GLOBAL RESEARCH Shortly before two synagogue attacks, the cancellation of a Holocaust Remembrance in Kiev, and attacks on Jews in Ukraine, US Senator John McCain stood shoulder-to-shoulder with the leader of one of the rising Neo-Nazi parties in the country. The party organizations are being accused by both Russia and external observers of exploiting the turmoil and deep divisions in Ukrainian society. The groups have pushed aside peaceful protesters, and employ violence to reach their goals. Experts on the region have criticized US funding of “democracy initiatives” which helped foster the protests, and say the Neo-Nazi thrust for power was predictable. In 2004 the leader of the fastest-growing far-right party, Oleh Tyahnybok, of Svoboda, gave a speech in which he attacked: “the Moscow-Jewish mafia ruling Ukraine” In another speech he denounced: “the Moskali, Germans, Kikes and other scum who wanted to take away our Ukrainian state.”

The Svoboda deputy party chief, Ihor Miroshnychenko, once wrote an attack on Ukrainian-American actress Mila Kunis on Facebook, saying: “Kunis is not Ukrainian, she is a Yid. She is proud of it, so Star of David be with her.” And warning of a Neo-Nazi takeover, a former top Reagan official has called Secretary of State John Kerry’s regional appointee, Victoria Nuland, “stupid,” as well as Kerry himself. Dr. Paul Craig Roberts, Assistant Secretary of the Treasury under Ronald Reagan, recently wrote: “there was no one in the Obama regime who had enough sense to see the obvious result of their smug, self-satisfied interference in the internal affairs of Ukraine.” Roberts blasts the US media for simplistic reporting which puts forth the Obama administration’s version of the events, that of peaceful, spontaneous protests met by a Russian crackdown and invasion. Seumas Milne for The Guardian writes: “The story we’re told about the protests gripping Kiev bears only the sketchiest relationship with reality.” As McCain took to the stage to encourage the Ukrainian protesters with promises of American support, he was greeted and flanked by Tyahnybok, the leader of Svoboda, which recently gained 38 seats in the Ukrainian Parliament. Svoboda is one of a number of Ukrainian far-right parties, and has ties to other “nationalist” movements across Europe, which preach virulent brands of anti-Semitism, ethnic purity, intolerance of homosexuality.

Another far-right group, Right Sector, openly took credit for engaging in violence during the protests and issued a statement which said: “Two months of unsuccessful tiptoeing about under the leadership of the opposition parties showed many demonstrators they need to follow not those who speak sweetly from the stage, but rather those who offer a real scenario for revolutionary changes in the country. For this reason, the protest masses followed the nationalists,” Svoboda takes credit for the iconic image, broadcast widely in the Western media, of protesters toppling the statue of Vladimir Lenin in the city center. Alec Luhn for The Nation reports that: “Svoboda is the most visible party on the square, it has essentially taken over Kiev City Hall as its base of operations, and it has a large influence in the protestors’ security forces.” Svoboda in western Ukrainian city of Lviv wearing uniforms of the former Ukrainian Insurgent Army In an interview with Democracy Now, Stephen Cohen, professor emeritus of Russian studies and politics at New York University and Princeton University, said of the peaceful protesters:”I think a lot of them have gone home.” Until recently, one of the official elements of Svoboda’s ideology was that government should consist of a single entity, the president, with no other legislative institutions allowed, thus reminiscent of the Nazis’ “Fuhrer Principle.” Writing for Alternet Max Blumenthal observed that: “After the 2010 conviction of the Nazi death camp guard John Demjanjuk for his supporting role in the death of nearly 30,000 people at the Sobibor camp, Tyahnybok rushed to Germany to declare him a hero who was “fighting for truth.” In the Ukrainian parliament, where Svoboda holds an unprecedented 37 seats, Tyahnybok’s deputy Yuriy Mykhalchyshyn is fond of quoting Joseph Goebbels — he has even founded a think tank originally called “the Joseph Goebbels Political Research Center.”

Another element of Svoboda’s ideology is that Ukraine should become a nuclear power. One factor to which the rise of such “nationalist” movements has been attributed has been rising youth unemployment. Georgy Kasyanov, a researcher at the Institute for the Development of Education. told The Nation that: “In the 2010 and 2012 elections, it became visible that a big part of the youth are moving toward nationalism.” Kasyanov worried that youth unemployment is rising in Ukraine as in the rest of Europe. On December 13, 2013 at the National Press Club in Washington DC, US Assistant Secretary of State for Europe, Victoria Nuland, openly admitted to US attempts to influence Ukrainian politics, saying that: “Since the declaration of Ukrainian independence in 1991, the United States supported the Ukrainians in the development of democratic institutions and skills in promoting civil society and a good form of government…We have invested more than 5 billion dollars to help Ukraine to achieve these and other goals.”

Russian President Vladimir Putin this week broke his silence over what he says is American involvement in fostering the protests, saying that the U.S. government had interfered in Ukraine “from across the pond in America as if they were sitting in a laboratory and running experiments on rats, without any understanding of the consequences.” Last December, Assistant Secretary Nuland and US Ambassador to Ukraine Geoffrey Pyatt toured the protests in Kiev, reportedly handing out cookies to protesters. Dr. Paul Craig Roberts says the situation has spun “out of control.” Roberts writes: “Yanukovich [the former Ukrainian president] is history, as are Washington’s “moderates.” The moderates are not only corrupt; they are stupid. The fools even disbanded the Riot Police, leaving themselves at the mercy of the armed right-wing nazi thugs. Ukraine is out of control. This is what happens when an arrogant, but stupid, Assistant Secretary of State (Victoria Nuland) plots with an equally arrogant and stupid US ambassador (Pyatt) to put their candidates in power once their coup against the elected president succeeds. “Making reference to Kerry’s threats to Russia, Dr. Roberts said:: “The puppet politicians who Washington intended to put in charge of Ukraine have lost control to organized and armed neo-Nazis, who are attacking Jews and Russians and intimidating Ukrainian politicians…The stupid Kerry, wallowing in his arrogance, hubris, and evil, issued direct threats to Russia. The Russian foreign minister dismissed Kerry’s threats as “unacceptable.” The stage is set for war.” Roberts is a Distinguished Fellow at the Cato Institute, and a Senior Research Fellow at the Hoover Institution. He is also a former editor of the Wall Street Journal and Businessweek. Russia Today (RT), owned by Russian state television, has released video of young, athletic men engaged in pitched street battles with police, brandishing and wearing the wolfsangel symbol of various units of the Nazi Waffen SS. RT has also released video of Right Sector leader Aleksandr Shevchenko issuing demands to a Ukrainian city council, while branding an AK-47. Dr. Roberts declared: ” Thug Aleksandr Shevchenko informed the CEC that armed activists will remain in CEC offices in order to make certain that the election is not rigged against the neo-nazis. What he means, of course, is the armed thugs will make sure the neo-nazis win. If the neo-nazis don’t win, the chances are high that they will take power regardless. “ RT Reports, “I dare you to take away my gun” Reports indicate that the Neo-Nazi groups attack both government authorities and left-leaning organizers of the protests equally. On December 4, labor organizer Denis Levin and his two brothers were beaten by a small Neo-Nazi crowd shouting “Glory to Ukraine” and “Death to Enemies.”

In early February, weeks before the corrupt, elected president of the Ukraine fled from office, Assistant Secretary of State Nuland and Ambassador Pyatt were recorded in a telephone call, which was leaked to the media, in which the future leadership of Ukraine was discussed. The story went viral after Nuland was heard saying “and, you know, f*#k the EU.” (transcript) Nuland is heard saying “Yats is the guy,” referring to Arseniy Yatsenyuk, one of the protest leaders, now Prime minister. Professor Cohen of NYU and Princeton told Democracy Now: “What are they doing? The highest-ranking State Department official, who presumably represents the Obama administration, and the American ambassador in Kiev are, to put it in blunt terms, plotting a coup d’état against the elected president of Ukraine.” The Deputy Director of the Center for Society Research in Kiev recently wrote: “What is most worrying is that the new government cannot control the infamous Right Sector. Its members are now popular heroes, the vanguard of the victorious “revolution”. They have guns captured from police departments in the western regions and now, after Yanukovych’s toppling, are demanding that the revolution needs to continue against “corrupt democracy” and liberalism. ” Some foreign policy observers speculate that US support of a breakaway movement on Russia’s doorstep may be an effort to punish Putin for his frustration of Western efforts to employ military force on Syria, as well as Iran. Obama has recently linked Syria with the Ukraine. Obama said last month at the North American leader’s summit in Mexico: “I think this is an expression of the hopes and aspirations of people inside of Syria and people inside of the Ukraine who recognise that basic freedoms — freedom of speech, freedom of assembly, fair and free elections — are fundamental rights that everybody wants to enjoy.” In 2005 it was revealed by General Wesley Clark that “Nonconservative” architects of the Iraq War within the Bush White House had planned to invade or attack not just Iraq, but “seven countries in five years,” Iraq, Libya, Syria, Somalia, Sudan, Lebanon, and Iran. Russian President Putin has played a pivotal role in frustrating such plans, most recently brokering a deal over chemical weapons in Syria, which politically neutralized US calls for war.

Observers have taken note of the fact that Assistant Secretary Nuland is married to Robert Kagan, one of the founders of Project for a New American Century (PNAC.) PNAC is the Washington think tank credited with spearheading, and providing the intellectual foundation for, a long-term drive for the US invasion and occupation of the Middle East, even long before 9/11. (List of Project for a New American Century affiliations with the Bush administration.) Wes Clark, Neoconservatives intend to attack “seven countries in five years.” Addressing the predicament of Jews in Kiev, last month Ukrainian Rabbi Moshe Reuven Azman advised Ukraine’s Jews to leave the capital, and, if possible, the country. In his February 25th article, “Is the US Backing Neo-Nazis in Ukraine?” – Alternet’s Max Blumenthal reports one protester’s estimate that around 30% of the protesters, at that time, were fascists. The figure is plausible given election returns for the Neo-Nazi parties in some Ukrainian provinces, which have nudged as high as 50%. In January, Rabbi Boruch Gorin of the Federation of Jewish Communities of Russia said of the protesters in Kiev: “Unfortunately, among the opposition leaders and opposition forces, well-defined, anti-Semitic speeches have already been recorded…This is extremely dangerous.”Ukraine has a grim history of Nazi collaboration during World War II, and anti-Semitism historically. Ralph Lopez majored in Economics and Political Science at Yale University. He writes for Truth Out, Alternet, Consortium News, Op-Ed News, and other Internet media. He reported from Afghanistan in 2009 and produced a short documentary film.